We do not buy coins/stamps. Phone: +91-8130696940
Send us an email: bidcurios@invertedmushrooms.com
Order Tracking Wishlist

Coinage of India began somewhere between early 1st millennium BCE to the 6th century BCE, and consisted mainly of copper and silver coins in its initial stage. Ancient Indian coins were stamped bars of metal. The kingdoms that minted their own coins included Gandhara, Kuntala, Kuru, Panchala, Magadha, Shakya, Surasena and Surashtra etc. 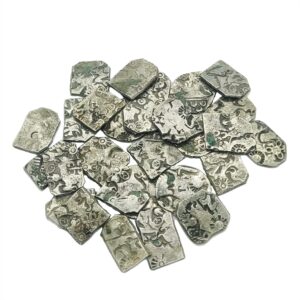 The precise date of the first appearance of coins in India is not known, but archaeological evidence suggests that coins were already being made and used in northern India by the mid-fourth century BC. The oldest coins so far discovered in India were made of weighed pieces of silver, stamped on only one side with between one and five punches. Such coins are now known as ‘punch-marked’ coins. The earliest of these seem to be oval and stamped by four round punches with symbolic designs. The force of the punches curved the metal so that these coins are dish-shaped. Smaller examples have also been reported with one or two punches only.

Cowry shells were first used in India as commodity money. The Indus Valley Civilization may have used metals of fixed weights such as silver for trade activities which is evident from the DK area of Mohenjo Daro from the late Harappan perod (dated 1900-1800 BC or 1750 BC). Similarities have been recorded between Punch marked coin symbols with those appearing in the Indus seals. Chalcolithic unmarked gold disc discovered from Eran dating to 1000 BC was probably utilized as money in that time. Since the Bronze Age, ratti (0.11 or 0.12 gm) or the weight of the Gunja seeds have been used as a base unit for the measurement of mass in the Indus Valley civilization. There is evidence of countable units of precious metal being used for exchange from the Vedic period onwards. A term Nishka appears in this sense in the Rigveda. Later texts speak of cows given as gifts being adorned with pādas of gold.

A Princely state was a entity of British India that was not directly governed by British, but rather by an Indian ruler under a form of indirect rule. There were 565 princely states in India at the time of Independence in 1947.